Comprised of a group of Chicago orchestral musicians who came together to play chamber music during the COVID crisis, these string and wind players are enjoying performing in the more intimate setting of chamber music, playing different repertoire, and performing more as a group of soloists.

Today’s all-Mozart program is a celebration of this composer who after 1781 was finally and fully realizing his musical talent. Mozart composed these three chamber works within the 10 year period after he left service to the Archbishop of Salzburg where he had worked since he was 13 years old. In 1781 Mozart had an argument with the archbishop who was unhappy with Mozart’s constant requests for extended concert leaves. Mozart tried to resign but his request was rejected. Soon enough, the archbishop’s secretary fired Mozart and then literally (and now famously) kicked Mozart in the behind as he left! The music written prior to the ejection incident was the work of a gifted musician. However, after 1781 Mozart wrote his masterpieces for orchestra, opera and chamber ensemble, including today’s three works.

Mozart wrote these works for principal musicians in the leading orchestras of his time. Since today we are hearing the Lyric Ensemble which is made of musicians from the Lyric Opera Orchestra, I have chosen recordings made by past principals of our other local band, the Chicago Symphony Orchestra. Playing together in the CSO for many years, these three master musicians all liked and knew each other well and played chamber music together outside of their orchestral duties. It is a treat to hear them shine in these chamber music settings. 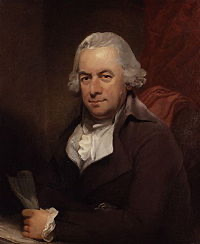 While on a four-month extended trip, Mozart renewed a friendship with Friedrich Ramm, the principal oboist of the Munich orchestra.  Mozart wrote this quartet for him in early 1781. Mozart uses the oboe instead of the first violin, and gives the oboe a concerto-like treatment in which it sings out brilliantly and independently against the backdrop of the three strings. The first movement (Allegro) features a sparkling theme carried primarily by the oboe and restated by the others.  The short and heartbreaking Adagio can be heard as an aria for oboe. The final Rondeau returns to the good-spirited mood of the first movement, once again showcasing the oboe against the strings. As a tribute to the virtuosity of Ramm, in the middle of this movement Mozart presents a personal challenge to Ramm by writing a high “F natural” for him to play, a note at the very top of the range of the instrument, and then repeats it as the work’s final note.

Listen here to Ray Still and the Fine Arts Quartet. Still was Principal Oboe with the Chicago Symphony for 40 years and played under almost all of the major conductors of the last half of the 20th Century. The Fine Arts Quartet was founded 76 years ago by members of the Chicago Symphony Orchestra, and is one of the elite few to have recorded and toured internationally for over three quarters of a century. 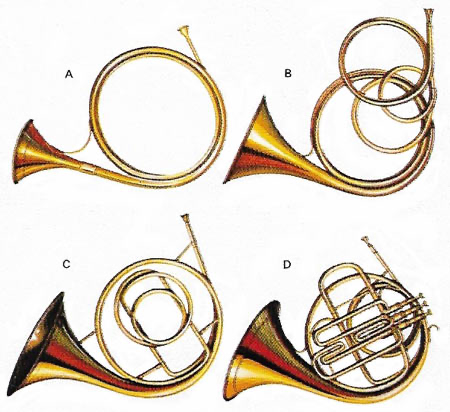 Evolution of the French Horn

As with the oboe quartet, Mozart composed and dedicated this chamber work to a musician friend, Ignaz Leutgeb, a horn player in the Salzburg orchestra. In his dedication, Mozart writes that he “takes pity on Leutgeb, donkey, ox and fool,” and later in the score, writes “Take a little breath” and “Thank God, here’s the end.” The horn is an exceptionally difficult instrument to play. The player must not “crack” a note, while moderating tone, volume, and pitch, and simultaneously playing rapid runs or long notes. Mozart’s mischievous comments were surely distracting while playing this temperamental and beautiful instrument.

In addition to the horn, this quintet is unusually scored for one violin, two violas and cello rather than the more customary two violins, single viola and cello. The Allegro is a study in contrasts: loud-soft; lyrical-rhythmic, horn-strings. The mood changes in the Andante, and becomes an intimate dialogue between the five instruments, each exploring the main theme. The Rondo is full of high spirits, ending with a bravura performance by the horn.

Listen here to Dale Clevenger and the Santa Fe Chamber Orchestra. Dale Clevenger was Principal Horn of the Chicago Symphony Orchestra for 47 years, and had a most distinguished performing career as classical musician (with dips into jazz as well) and as conductor. 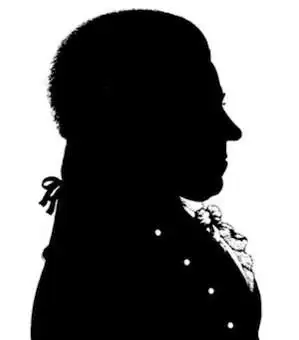 Now we have a third composition for another close Mozart friend, the supremely gifted clarinetist but infamous scoundrel Anton Stadler. In addition to being the principal clarinet of the court orchestra in Vienna, he was a well-known mooch, thief and philanderer, but Mozart respected him enormously as one of Vienna’s finest musicians and wrote this glorious chamber work for him.

Unlike the previous two works for today and written seven or eight years later, this quintet bears the hallmarks of a more mature Mozart. No longer is this in concerto style, but rather the clarinet and strings are fully integrated, with the melodies being shared by all. The opening Allegro features three glorious themes, each explored with modifications and ornamentations. The second movement is a quiet, gorgeous song for the clarinet together with first violin. The third movement explores the clarinet’s virtuosic possibilities, with a charming middle section in the form of a simple country dance. The final movement offers a theme with six variations which feature complex ornamentations and extensions, giving a special spotlight to a somber lyrical line played by the viola in the third variation. The final variation returns with good cheer and fellowship for all, a delightful close to one of the masterpieces of the literature.

Apologies: we have to listen to four links to get all four movements:
Allegro
Larghetto
Minuetto and Trio
Allegretto con Variazioni 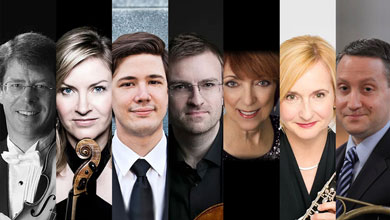