Windscape is a wind quintet formed by five eminent wind soloists. As Artists in Residence at the Manhattan School of Music the members of Windscape are master teachers, not only imparting the secrets of instrumental virtuosity, but also presenting a distinctive concert series. They launched a Manhattan School-wide Composer Commission Competition and have performed the winning compositions in a number of their concerts. The Quintet has also performed masterful transcriptions of works such as Bach’s Art of the Fugue with string quartet.

Today we have a special and unusual program of works by three masters, each transcribed for woodwind quintet from their various original formats. For these program notes, we have been most fortunate to be able to get personal insights and expert commentary by the musicians who themselves created these transcriptions, and who will be performing them today with their colleagues.

Johann Strauss II, “The Waltz King” and the son of an enormously famous musician, was even more successful than his father. Over his 73 years he composed polkas, quadrilles, operettas dances, and more than four hundred waltzes, all of which established his reputation as one of the most renowned composers of light music. The composition of this famous waltz, originally composed for full orchestra, was occasioned by the visit of the Austrian Emperor, Franz Joseph I, to Berlin to meet the German Kaiser, Wilhelm II. The astute publisher, Fritz Simrock, suggested to Strauss that “Kaiser-Walzer” might be a suitable title for the work since it would, ever so diplomatically, refer to both monarchs.

Alan Kay, clarinetist with Windscape and transcriber of this piece, has offered these comments on his work:

I originally arranged this piece to fill out a program of Viennese music we performed at our musical home, the Manhattan School of Music, in New York City. We had Beethoven, Mahler and Schubert on the program, and I thought it might be fitting to add a piece of music that truly embodies what we often think of as “Viennese”: a waltz by Strauss! The Emperor Waltzes have been favorites of mine since about 1987, when I first discovered the treasure trove of works adapted by Arnold Schoenberg and his students Alban Berg and Anton Webern for the Society for Private Musical Performances in Vienna from about 1918-1921. These adaptations of important works of the day, including Debussy’s “Afternoon of a Faun,” Mahler’s Symphony No. 4, Bruckner’s Symphony No. 7 and many others, presented opportunities to expose larger works to a society of interested performers, composers and laypeople in a much more intimate (and less expensive!) setting than a concert hall.

One of the pieces was Strauss’ “Emperor Waltzes,” scored for a string quintet, flute, clarinet, harmonium and piano. The harmonium, a small organ found in many European homes then, was an integral part of all of these arrangements. The harmonium player pumps foot pedals which blow air through reed pipes, and controls dynamics with additional pedals. Considering the “wind” and reeds of the harmonium as well as the original flute and clarinet participants, it seemed natural to adapt the piece one step further to the medium of wind quintet. It’s a delight to play, and we feel it works pretty well!

Beethoven wrote these seven variations as a set for cello and piano, taken from a love duet from Mozart’s opera The Magic Flute, sung by Papageno and Pamina. A variety of emotions are expressed in the variations we hear, ranging from sprightly, elegant, thoughtful and poignant, to joyous, sincere and gallant.

Frank Morelli, bassoonist with Windscape and arranger of this work, has made these observations on his transcription:

I’ve performed this work on bassoon, where I am playing the cello part, and have always loved it. The bassoon is in the same range as cello, and there is only one phrase that I bring down one octave to make it sound more idiomatic on the bassoon. That’s all the adaptation necessary in that instance.

The first issue when transcribing a work that is originally for cello and piano to an ensemble such as a woodwind quintet, or any group that has instruments spanning from soprano down to bass voices, is that the voicing of the original composition is “bottom heavy” because the cello basically spans the tenor down to bass voice range. Only the piano’s right hand is in the higher register. Therefore, I had to choose where to bring the cello’s line, in particular, into a higher octave to suit the flute and oboe, especially.

Of course, the right hand (higher part) in the piano writing already suits the higher instruments in the quintet.

The faster, more linear variations were easier to transcribe. They are comprised of independent voices that could be “handed off” from instrument to instrument, or easily set as counter melodies to the principal line.

The bigger challenge was in certain slower passages. One has to be aware of sonorities that ring longer on the piano. Beethoven would have taken that into account in writing for the piano in the original version. Thus, there are times when the winds need to sustain notes for a bit longer than in the original.

I benefitted greatly by being able to bring my fledgling version to my dear colleagues and Windscape. My work in progress could then be improved after I had heard the result of my initially, often less-than-satisfactory version. And, more important, my colleagues would provide valuable feedback and invaluable suggestions for improving my effort. What we play today is the result of that evolutionary process.

Here is a lovely performance of the original version by Jacqueline du Pré, cello and Daniel Barenboim, piano, again as above for the Strauss:

Du Pré was considered to be the finest British cellist of her day before her career was tragically and prematurely ended by multiple sclerosis. She and Barenboim were husband and wife, and they had an exceptional career performing and recording together in the late 1960’s and early 1970’s.

This Quartet is one of the few works performed publicly within Schubert’s lifetime, and is the only one he saw published. He began work on the Quartet after a long hospitalization toward the end of his short life, when he was deeply depressed and in despair. He wrote to a friend, “I feel myself the most unfortunate, the most miserable being in the world. Think of a man whose health will never be right again, and who from despair over the fact makes it worse instead of better, think of a man, I say, whose splendid hopes have come to naught, to whom the happiness of love and friendship offer nothing but the most acute pain, whose enthusiasm (at least, the inspiring kind) for the Beautiful, threatens to disappear, and ask yourself whether he isn’t a miserable unfortunate fellow?”

Schubert’s genius for song permeates the entire Quartet, starting with the first movement in which the second violin plays an accompaniment which strongly suggests his famous song “Gretchen am Spinnerade.” The theme of the second movement is taken directly from his incidental music for the play Rosamunde.

David Jolley, horn with Windscape, has given us these comments on his transcription:

The challenge of transcribing this work for winds is twofold—one is to use the winds as Schubert would use them, in a symphony, for instance. The other is, through doubling, to suggest the weight of the string writing in the dramatic passages in which this music abounds. In attempting this transcription, I would have to say that I began it at first solely to hear my wonderful colleagues play the opening theme of the quartet. It all grew from there. As classical musicians, we all live to play the greatest music we can, so to play this Schubert is both a great challenge and a great pleasure.

Here is the original of “Gretchen am Spinnerade,” performed by Jessye Norman and Chicagoan Phillip Moll:

and here is “Rosamunde,” performed by Michael Tilson Thomas (starting at 1:50): 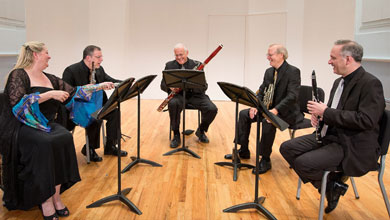